Skip to content
Diplomatic Immunity: What, Who, Why and How?

Diplomatic Immunity: What, Who, Why and How?

Living in or near the nation’s capital means that one way or another you will interact with officials of foreign states, employees of international organizations, foreign missions, their staff and workers. We often see “diplomat” license plates while driving in DC area. Most of these individuals enjoy a special protection called “Diplomatic Immunity.” This week’s brutal beating of demonstrators in the nation’s capital by the security detail of the Turkish president raised many questions about the meaning, extent of, and exceptions to the diplomatic immunity. I will try to answer most of these questions below in the simplest and shortest way:

(1) What does it mean? – Diplomatic Immunity means that those individuals cannot be held personally liable for criminal, administrative or civil violations, while they are here in diplomatic capacity.

(2) Who grants it? – The US State Department issues special visas (A and G), which carry varying levels of immunity, depending on the nature and purpose of the visit.

(3) Who gets it? – foreign officials, embassy staff, foreign missions, their families, and workers, and, on case-by-case basis, employees of international organizations, their family, staff, security, and domestic workers.

(4) Why grant immunity? – to encourage diplomatic relations and communications between the countries even at the times of conflict between them. The concept of diplomatic immunity begins from ancient times, when tribes would send envoys to the enemy territories for negotiations. The current laws on diplomatic immunity are formalized by Vienna Convention.

(5) Can it be waived? – there are no formal exceptions to the diplomatic immunity under international laws. However, the immunity can be waived by the diplomat’s government. The diplomatic immunity also does not mean total exoneration or exemption from local laws. The official State Department booklet states: “Frequently (and erroneously), immunity is understood to mean pardon, total exoneration, or total release from the responsibility to comply with the law. In actuality, immunity is simply a legal barrier which precludes U.S. courts from exercising jurisdiction over cases against persons who enjoy it and in no way releases such persons from the duty, embodied in international law, to respect the laws and regulations of the United States.”

(6) Are there exceptions or ways around it?

(a) Criminal Matters: One clear avenue for the State Department, in the case of a criminal act by a diplomat, is to simply expel that person from the US, albeit without criminal prosecution. However, if the crime committed is especially egregious, typically, the State Department will exert pressure on the diplomat’s government to waive his/her immunity from prosecution for public interest. For example, in 1997, upon request of the State Department, the government of the Republic of Georgia waived immunity of its deputy ambassador, when he, while being severely intoxicated, caused an accident killing a teen-ager and injuring four others at the Dupont Circle in Washington, DC. He was sentenced to seven years in prison, three of which he served in North Carolina.

(b) Civil Matters. The issue of diplomatic immunity in civil matters (i.e. claims of compensation) are somewhat alleviated by the requirements of insurance coverage. In fact, the minimum insurance coverage requirements for diplomatic vehicles in the US are much higher than any individual state requirements. By law, the diplomatic vehicles are required to have a minimum of $100,000 personal injury coverage per person, $300,000 personal injury per accident and $100,000 property damage per accident. Nevertheless, if the victim’s actual damages are higher than the policy limits, the diplomatic immunity kicks in to protect the diplomat from personal and individual liability for compensation beyond the policy limits.

However, as noted above, the concept of diplomatic immunity protects from liability only the individual, not his or her country’s government. It means that, if the diplomat was acting within the scope of his or her mission, then under principal-agent theory, the government of his/her country can be held monetarily liable for the damages caused by the diplomat.

On the other hand, the foreign governments are also granted some form of immunity, which is known as “Sovereign Immunity.” In the US, the foreign government’s immunity is governed by Foreign Sovereign Immunity Act (FSIA) enacted in 1976. However, there are exceptions. One of the exceptions from FSIA are claims for monetary damages for personal injuries, death, or loss of property, occurring in the United States. 28 U.S.C. 1605(a)(5).

(7) Conclusion: How does it all play out in relation to Erdogan’s staff beating protesters in DC?

(a) Criminal Prosecution. The actions of Erdogan’s staff are clearly criminal under multiple laws, including Federal Hate Crimes Prevention Act. By now, most of Erdogan’s security personnel had probably left the US together with him. If any of the individuals involved in the attack were members of consular mission, then, as stated above, the State Department will likely demand their expulsion from the US. In the ideal world, the State Department would immediately demand waiver of immunities and detain those individuals for criminal prosecution. However, unfortunately, the State Department’s reaction has been almost dismissive and ignorant “We are concerned by the violent incidents involving protestors and Turkish security personnel Tuesday evening. Violence is never an appropriate response to free speech, and we support the rights of people everywhere to free expression and peaceful protest. We are communicating our concern to the Turkish government in the strongest possible terms.” At this point, I wouldn’t keep my breath hoping for criminal prosecutions.

(b) Monetary Damages / Civil Suits. Applying the theory of Respondeat Superior (i.e. principal-agent) and under the codified exception to FSIA, the government of Turkey can be successfully sued for damages, including injuries, pain and suffering, mental anguish, humiliation, and psychological damages, due to the actions of Erdogan’s staff. Strikingly President Erdogan himself can be seen on the videos calmly observing the actions of his staff. 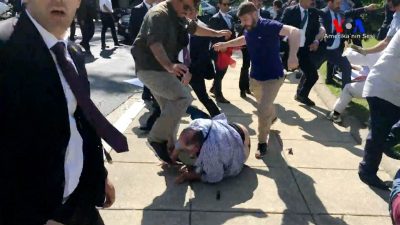 The videos show that the individuals being assaulted by Erdogan’s staff were not aggressive, armed or physically provocative. The Turkish government claims that the altercation was “provoked” by pro-Kurdish and pro-Armenian demonstrators. There are no videos or even claims that the demonstrators attacked Erdogan’s staff. So, the Turkish government response seemingly implies that the protesters were rightfully beaten because either Erdogan or his staff felt offended by their chants. Obviously, the Turkish government fails to understand the meaning of free speech. It is not surprising to see Erdogan’s forces beat, jail and torture peaceful demonstrators in Turkey. But every American’s blood should boil seeing these foreign officials attack Americans in the US for exercising their free speech. As Trevor Noah put it best, it is like having strangers come into your house and brutally beat your children.

Ismail Shahtakhtinski, Esq. is the founder and principal attorney at I.S. Law Firm, PLLC, an international law firm representing individuals and organizations in a broad range of immigration matters with an emphasis on US asylum law and human rights.