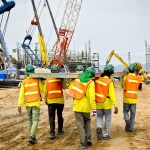 The dangerous nature of construction occupation

Construction, along with some other professions, represents one of the most dangerous occupations in the United States. According to the Bureau of Labor Statistics, one in five worker deaths in 2013 were in construction. The main causes of construction fatalities are falls, struck by object, electrocution, and caught-in/between. These incidents accounted for more than half the construction worker deaths in 2013. What you need to know is that you may have the right for compensation despite of your legal status or the significance of your injury. Many injuries escalate and may become a serious issue even though at first they may seem minor and unimportant. It is unfortunate that many injuries go undocumented until it is too late; thus, it is very important you report an injury to your supervisor and contact a competent injury lawyer as soon as possible.

As mentioned earlier, many injuries go unreported out of workers’ fear either to ruin relationships in the workplace or to lose a job completely. Other reasons may include fear to be deported for the lack of residential status, fear to be harassed, or even fear to lose an opportunity to get promoted. This “under-reporting” tendency is alarming which leads to another issue – inaccuracy and under-estimation of death and injury reports in the workplace led by Health and Safety Agencies. Generally, a workers’ compensation claim or a personal injury action is a civil matter, which has nothing to do with the injured employee’s immigration status. If you are unsure about your rights as an employee or if you fear of adverse immigration consequences, you should immediately consult with attorney.

What is Workers’ Compensation?

Workers’ compensation refers to the monetary compensation for lost income, disability, loss of earning capacity, and medical coverage of workers if they were injured at a job where neither employers nor employees are at fault. This type of insurance is paid by employers to ensure safety and coverage to their employees, and employees are not obligated to contribute to its cost. This compensation is tailored towards workers’ protection in case of an injury while performing their duties, so you have every right to demand it if you get hurt at your job.

What is covered under Workers’ Compensation?

What if a third party (not employer) caused the injury?

Generally, employees who suffer on-the-job injuries and diseases are eligible for benefits under the Virginia Workers’ Compensation Act, even if the injury was not caused by anyone’s negligence. However, if the injury resulted from a negligence of a third party, the injured employee may also recover additional compensation from third parties or their insurers. An example of such a case is an injury caused by defective equipment. In addition to the workers’ compensation claim, the employee injured at work due to defective equipment may also have a concurrent product liability claim against the manufacturer of the defective equipment. This is important, because unlike a worker’s compensation claim, a claim against a third party may also include “pain and suffering”, additional compensation for lost income, loss of enjoyment of life, and, in some circumstances, punitive damages.

Consult a skillful attorney to protect yourself and your family

Our team of professionals takes immediate action to identify witnesses and secure evidence, which may be crucial to prove the liability and the extent of the injuries suffered by our client.  Our attorneys and investigative team often visit the sites of the accident to take photographs, search for evidence and question potential witnesses.  We send spoliation notices to all parties who may hold anything that can be used as evidence in the case.  For example, it may be imperative to send notices to the EMS and Police Department to preserve 911 call recording as well as any notes or photographs that the officers may have taken at the scene of the accident. Although the actual records can be obtained through court subpoenas in the course of litigation, it is important to notify the custodians to preserve such records.  The subpoenas may take a long time and, unless a spoliation notice is duly provided, there may be no duty on the holder’s part to preserve the evidence that may end up being crucial for the outcome of the case.

We represent clients on a contingency basis.  This means that we charge no fees unless we recover a compensation for you.  For a free consultation and case evaluation, please contact us: +1-703-527-1779 or via e-mail: [email protected].